After leaving the frenetic Marrakesh, here’s my superficially favorite thing about Fez:

No motorcycles in the medina!

Instead of motorcycles, however, you do have to contend with these guys: 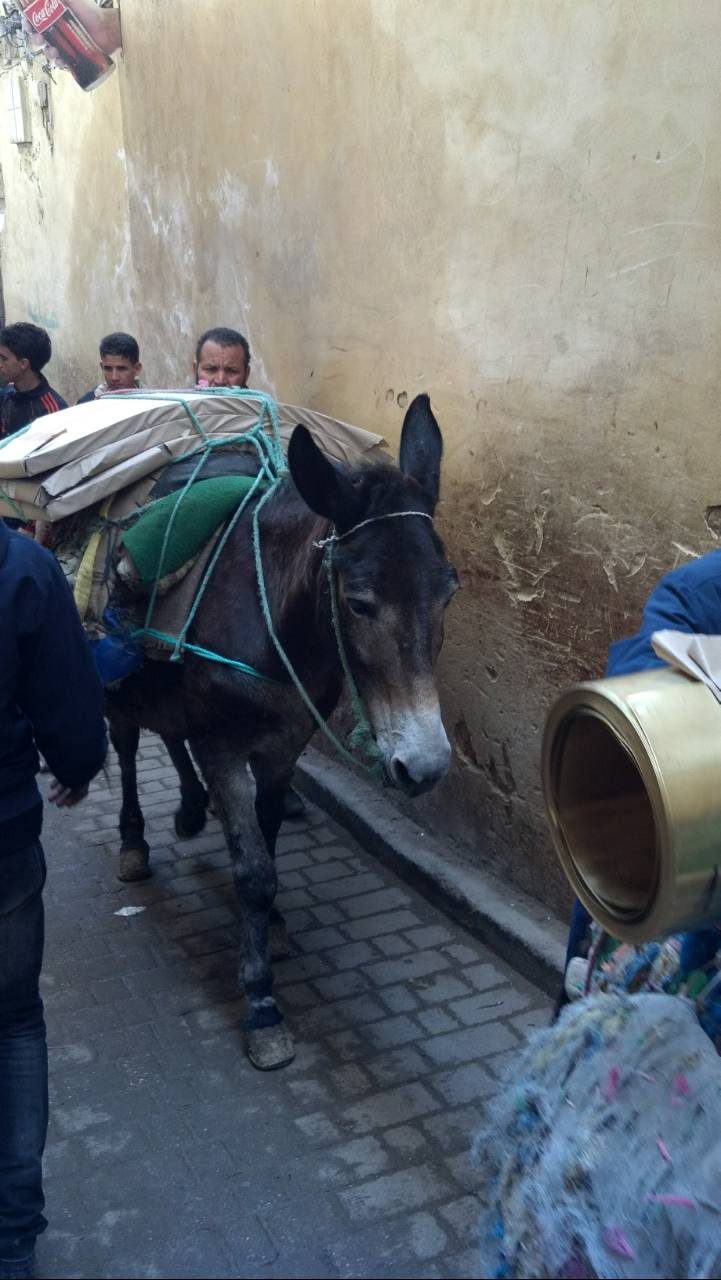 I think the reason donkeys haven’t been overtaken by motorcycles in Fez like they have in Marrakesh is the fact that the Fez medina is hilly, whereas the one in Marrakesh is flat. The medina (medieval old town) in Fez has over 9,000 streets, mostly short, narrow, curvy, hilly, and unsignposted. Donkeys are the chief way to transport things a person can’t carry there, although, as our guide described it, they have “new technology” in the form of a wheeled cart that is starting to take hold. (I didn’t see any when I was here 13 years ago.) The cart is nice in the sense that you don’t have to flatten into a wall or duck into a doorway when you hear “Belloc!” (get out of the way!) but they don’t seem as good at managing the stairs that pop up everywhere. (Also, they’re not as fun to talk about.)

Given the 100% likelihood we’d get hopelessly lost walking around by ourselves, we decided to hire a guide during our first day in Fez. If you look closely, you can see our guide, Abdul, leading Karen in one of Fez’s winding streets. (He’s wearing a brown robe.) 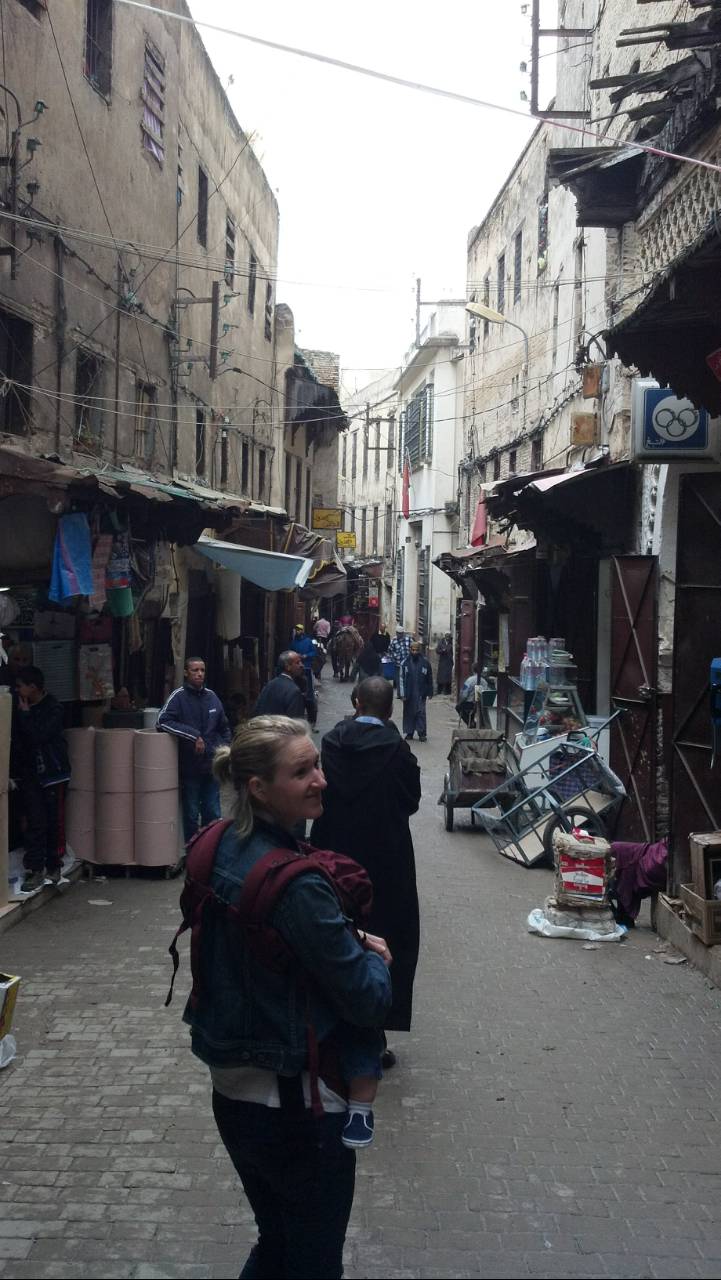 HT is obsessesed with Star Wars. He naturally, therefore, thought Abdul, whose traditional Moroccon garb (djellaba) does look suspicially like that worn by Obi-Wan Kenobi, was a Jedi.

“What’s our Jedi’s name?” “He’s trying to save us from the Sandpeople!”

He didn’t actually have any mystical powers (or a lightsaber–I checked,) but Abdul did do a very capable job steering us through the city. We got to see some traditional wool/silk weavers (and their store, which hurt the budget a little) and the traditional leather makers. Behind the medina/souk itself, the largest (over 100,000 inhabitants) such place in the Arab world, the leather tannery is probably the most famous thing about Fez. Here’s what it looks like: 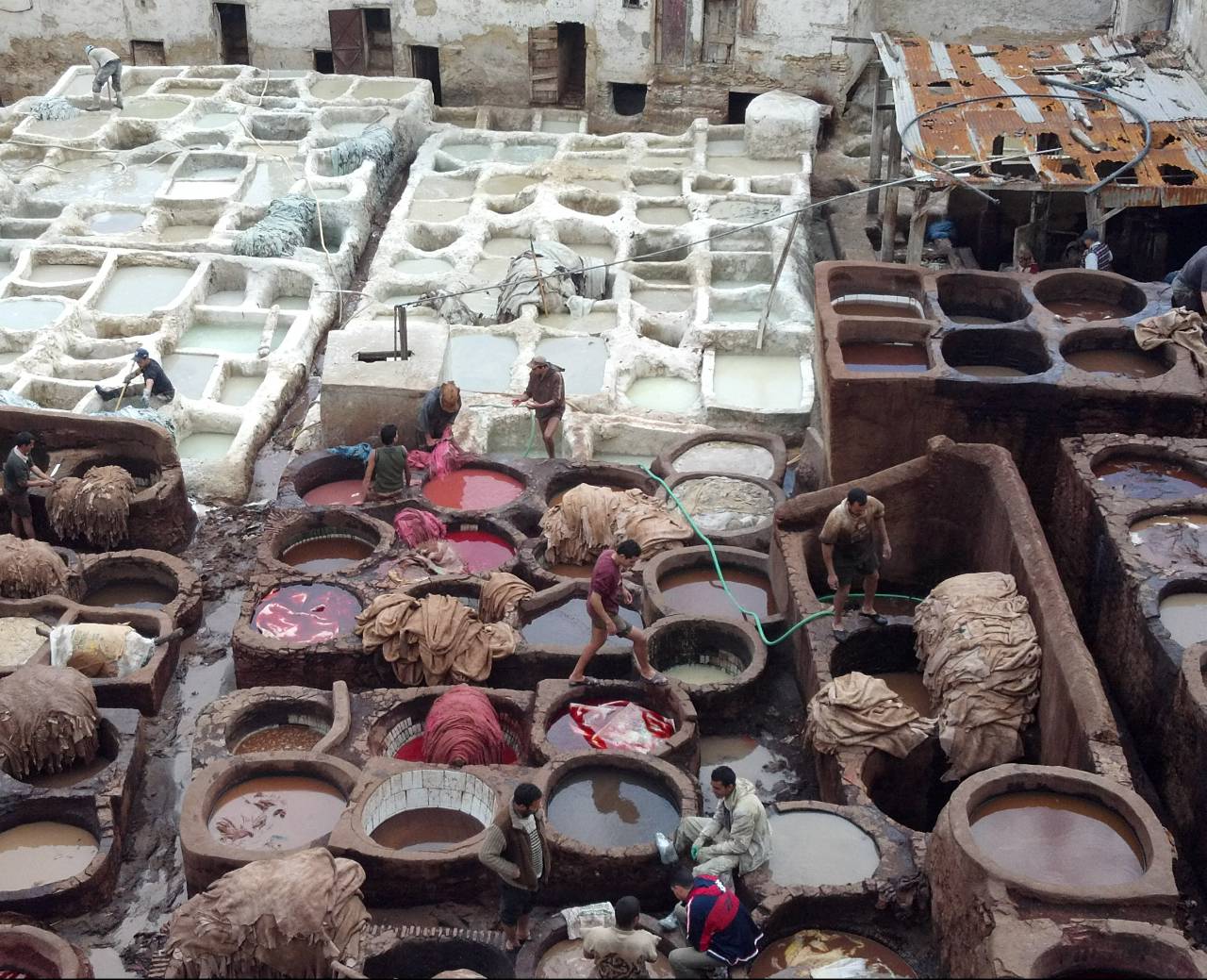 In this system, a finished piece of leather takes several weeks to produce. They start with the white bins in the upper left (filled with pigeon poop and a few other things) where the leather sits for a week to bleach it out and get ready for the next step. After that, it goes into one of the colored vats you can see at the bottom. The workers run around the ledges in between each collection of noxious chemicals (they hand sprigs of mint leaves to visitors to help with the smell) and then jump in each to move the pieces around. Overall, it’s not terribly safe and many of the workers eventually develop complications from direct exposure to these chemicals over the years.

Therefore, we were a little chagrined to learn that HT is really excited to be a “leather guy” when he grows up. (He used to want to be a robot maker.) In fact, when we went out to the leather shop balcony to check out the tannery, he was competely enthralled–asking to go back and see it again whenever we stepped away.

Karen and I thought our future for having at least one child working in a non-toxic industry now rested with CR, but HT informed us, “when I am a man, CR and I are going to live in a red house together and WE’LL BOTH MAKE LEATHER!” The consolation is that if we’re good, Karen will get a leather bag and I’ll apparently get leather pants for Christmas.

One funny thing about the medina is that you have no idea what a house is like from the outside. One value here is to be humble about material wealth, so every home looks very plain from the outside. (Karen’s first reaction when we got to the outer door of our pretty opulent B&B was that we’d screwed up and booked a dump.) You can see from all the satellite dishes in this photo, however, that wheeled carriages aren’t the only “new” technology present in Fez: 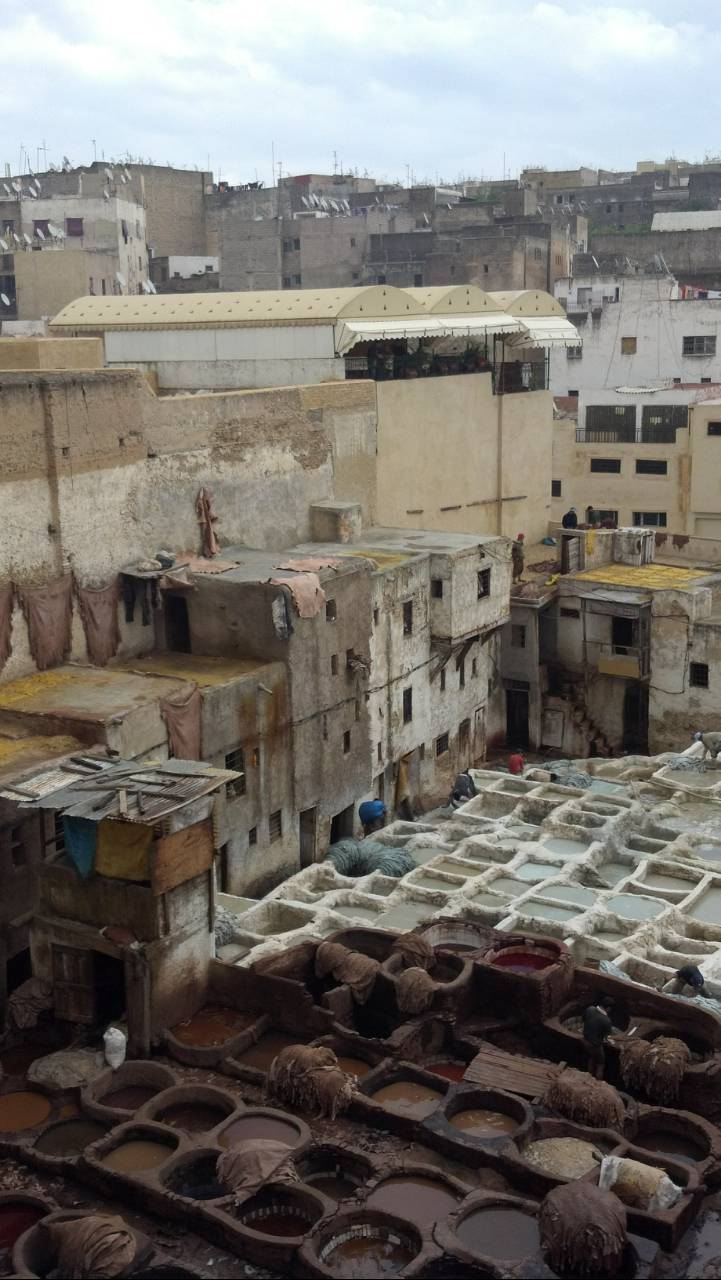 After our first day with a guide, we set off on our own during the second day. One sight was a pottery factory where HT got to see how they sculptured, fired, painted, fired again, (and for mosaics, cut, assembled, and glued) the pottery. He was excited, especially when the painter let him write his name on a little cup (which I’m assuming was recycled,) but he still would rather be a “leather guy” than a “pottery guy.”

The other big thing we did on our second day was visit a couple palaces that were near our B&B. They were both pretty stunning, but what was sad was the fact that there was no effort made to renovate them. The first was the former residence of a locally famous painter, so the caretaker let us see some of his works on display. (HT had a passing interest, but was more interested in being Spider Man and shooting his webs at Electro:) 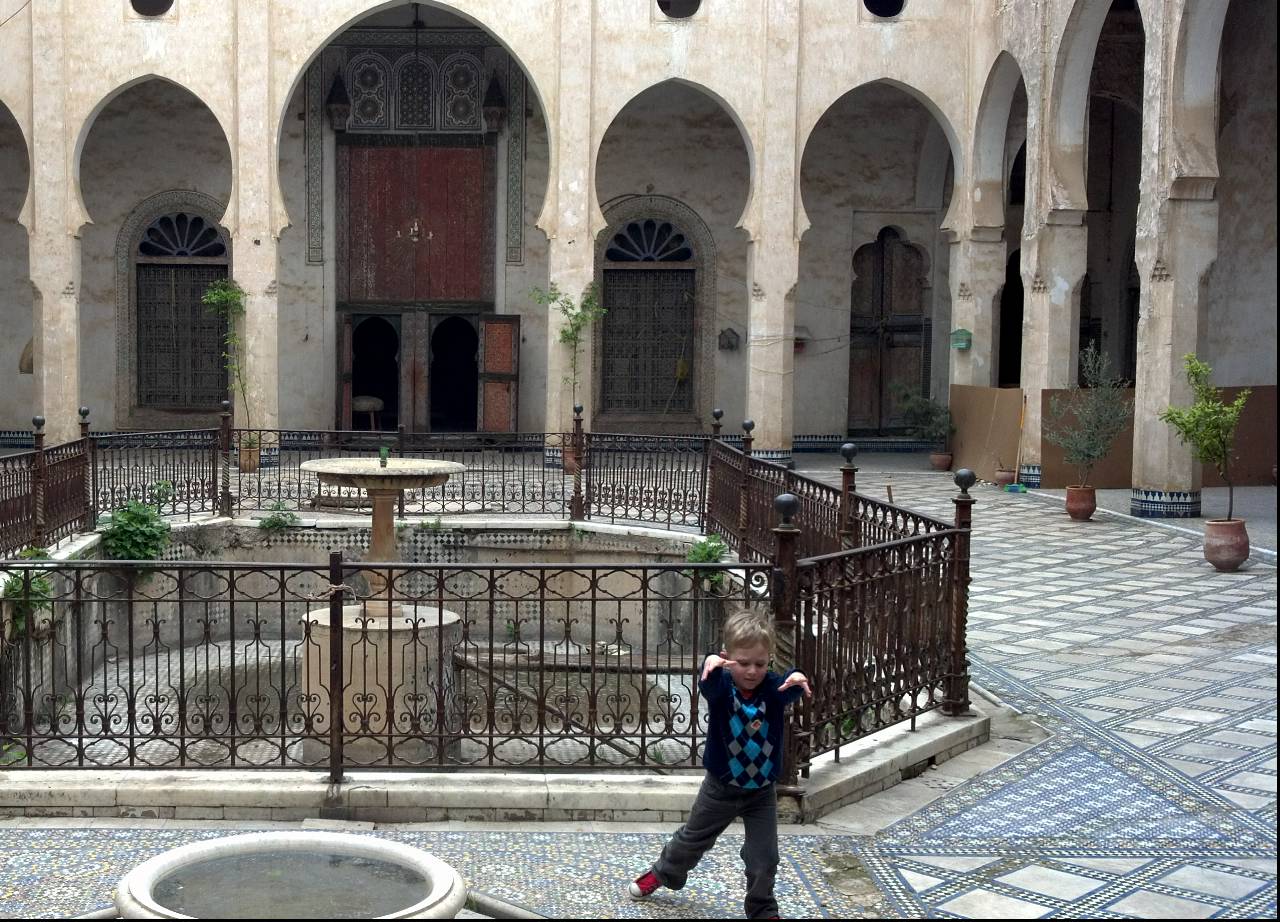 The second palace–which we found at the bottom of a hill that was so non-descript we thought we were in the wrong place–was even more stunning. When we first arrived there, what looked like a guard told us the palace was closed. As we were walking away, a teenager with a stocking cap came up behind us and said, no, it’s OK, we can see the palace. Like everything else in Fez, it was pretty dumpy from the outside, so we were shocked by how gorgeous the interior looked–just about comparable to the royal palace we’d seen in Marrakesh: 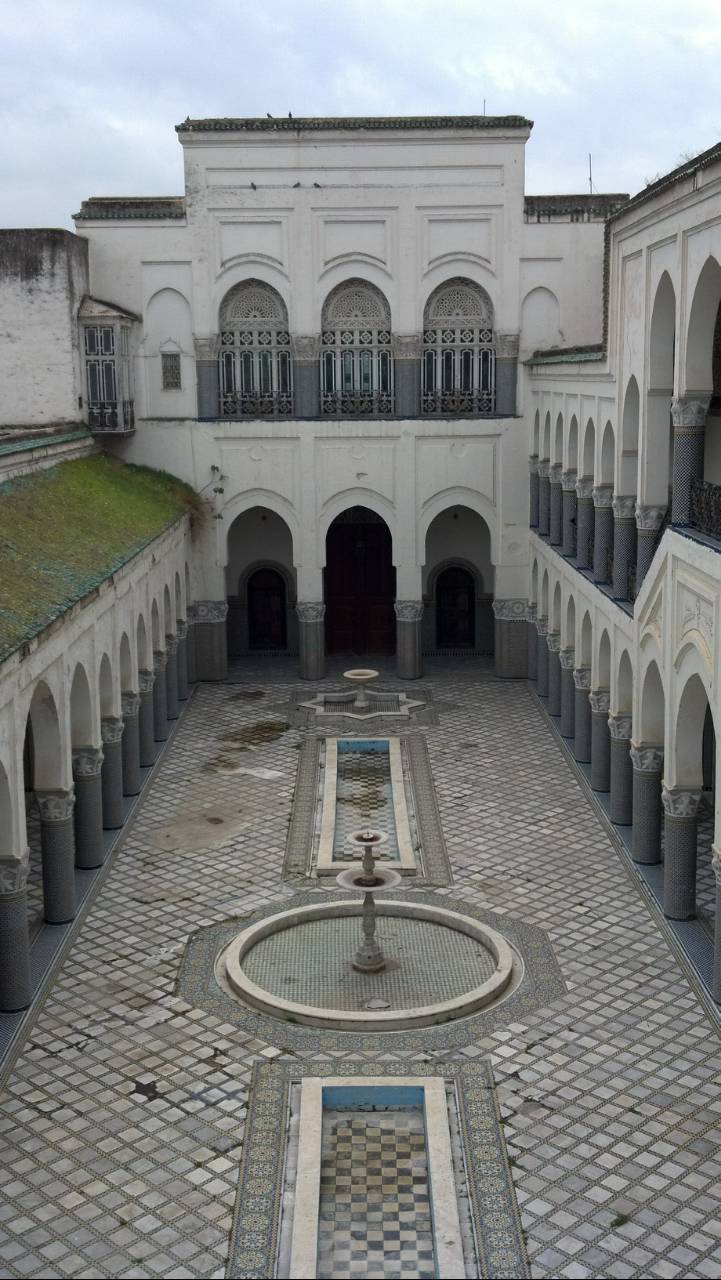 That’s why we were extra shocked to learn that the kid with the stocking cap and dirty clothes actually lived there. His grandfather (or maybe great grandfather) had built the place and this boy’s family plus the one of his uncle’s both lived there today. You can see a toy truck for the baby in this picture here: 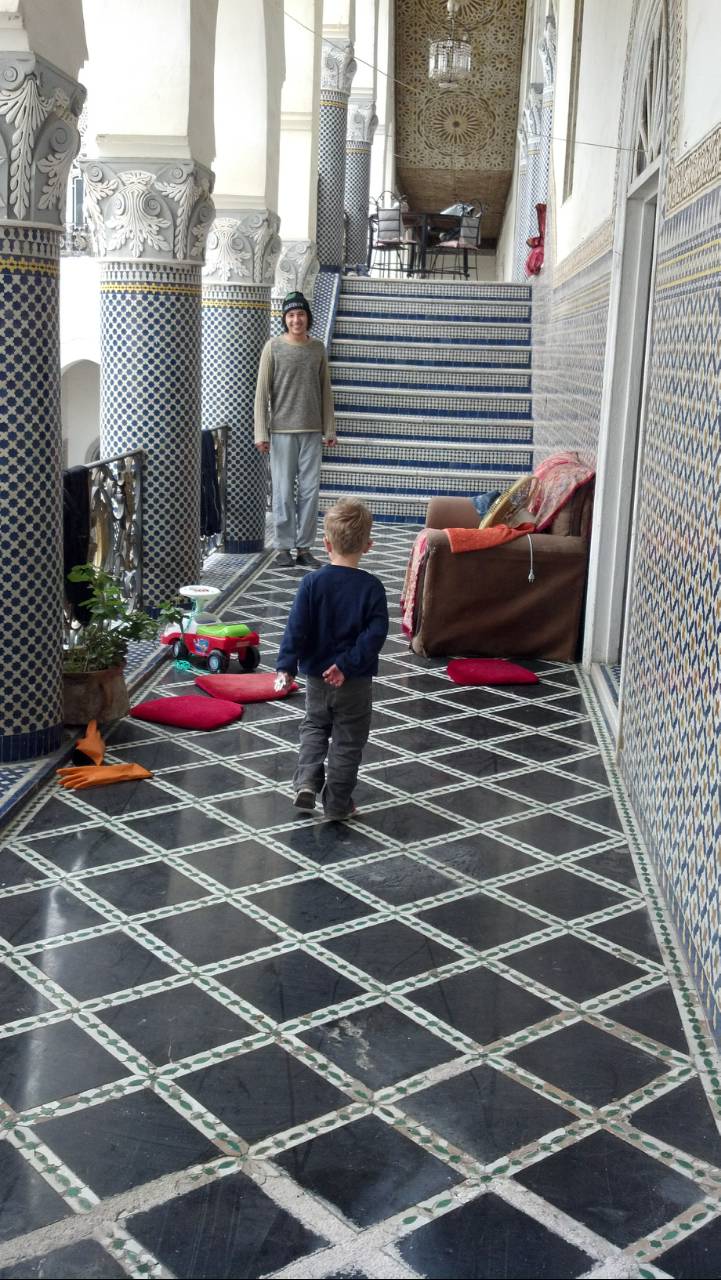 He introduced us to his family, who were sitting in a small room, with one of his siblings playing a video game. This palace wasn’t in as bad of shape as the first palace (which had a drooping walkway on the second story held up by a big makeshift pillar,) but it clearly needed some fixing up. The boy said his family had no money to do it and the government wouldn’t help, so they just sat around playing video games in the palace their ancestor built. Karen and I asked our B&B staff later why they didn’t sell to someone to make a nice hotel or restaurant (which is what had happened with our place, even though it wasn’t quite a palace) and they said they wouldn’t be able to charge enough to make it pay off.

Finally, this is a little lame, but we decided to go for pizza during our second night in Fez. The pizza was delicious, but mostly I’m writing about this to introduce the rooftop dining area with a great view of the city. (We didn’t actually eat there as it was too cold and windy–as HT was fond of recounting over the next couple of days, “we can’t eat there, our pizza will BLOW AWAY!”) 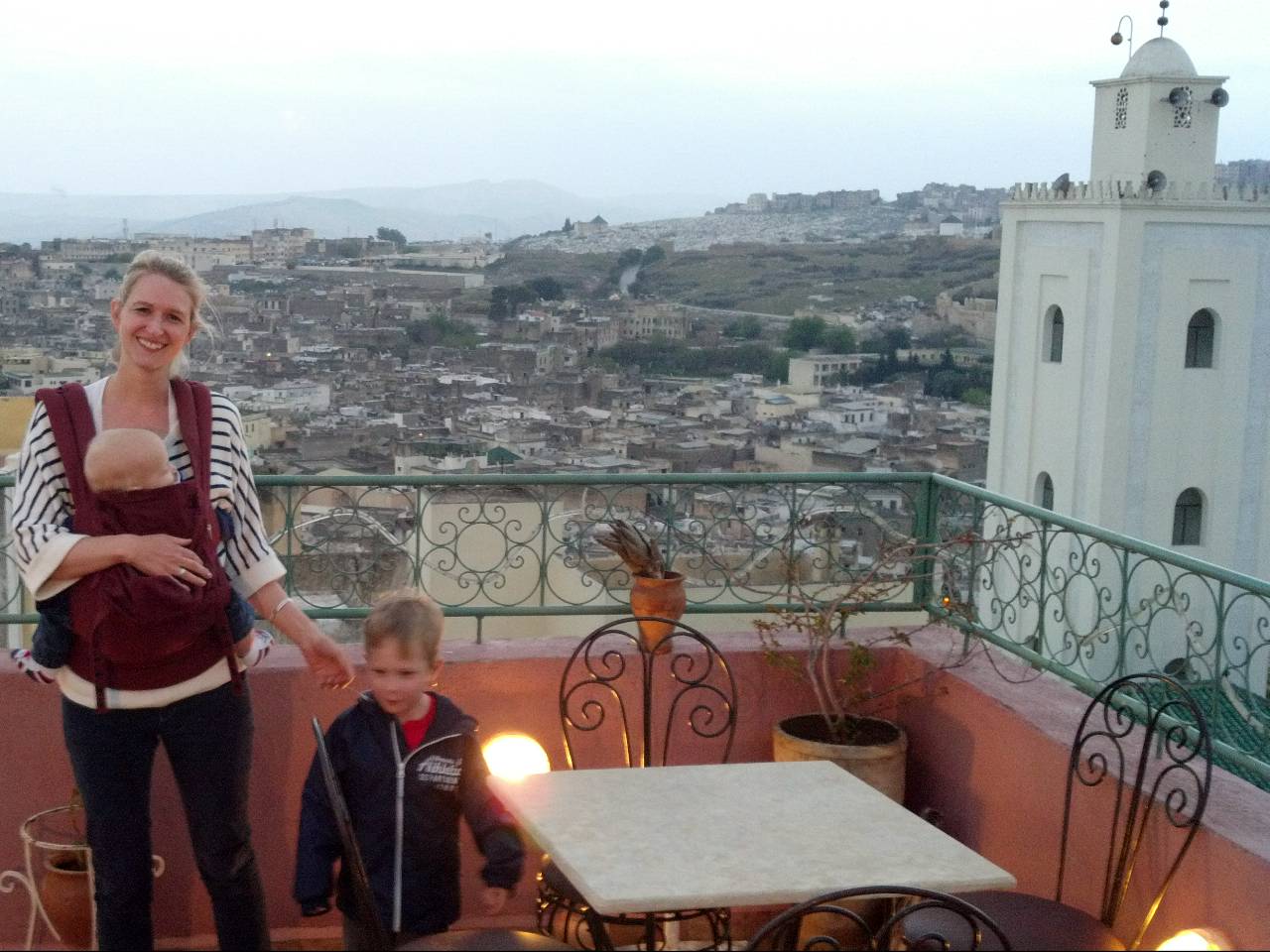 We’re not quite done yet, but with the fascinating, motorcycle free medina, super nice (but not super expensive) place to stay, excellent shopping, and new profession for HT, we’re pretty sure Fez will end up being the highlight of our trip. We’re very glad we came!