Today was another day that HT described as his “best day EVER!” on the “Big, Big, Big, Big Adventure.” (Although he did say his favorite thing overall was the “cave castle” in Sintra.)

Besides, that, though, here was his favorite part of the trip: 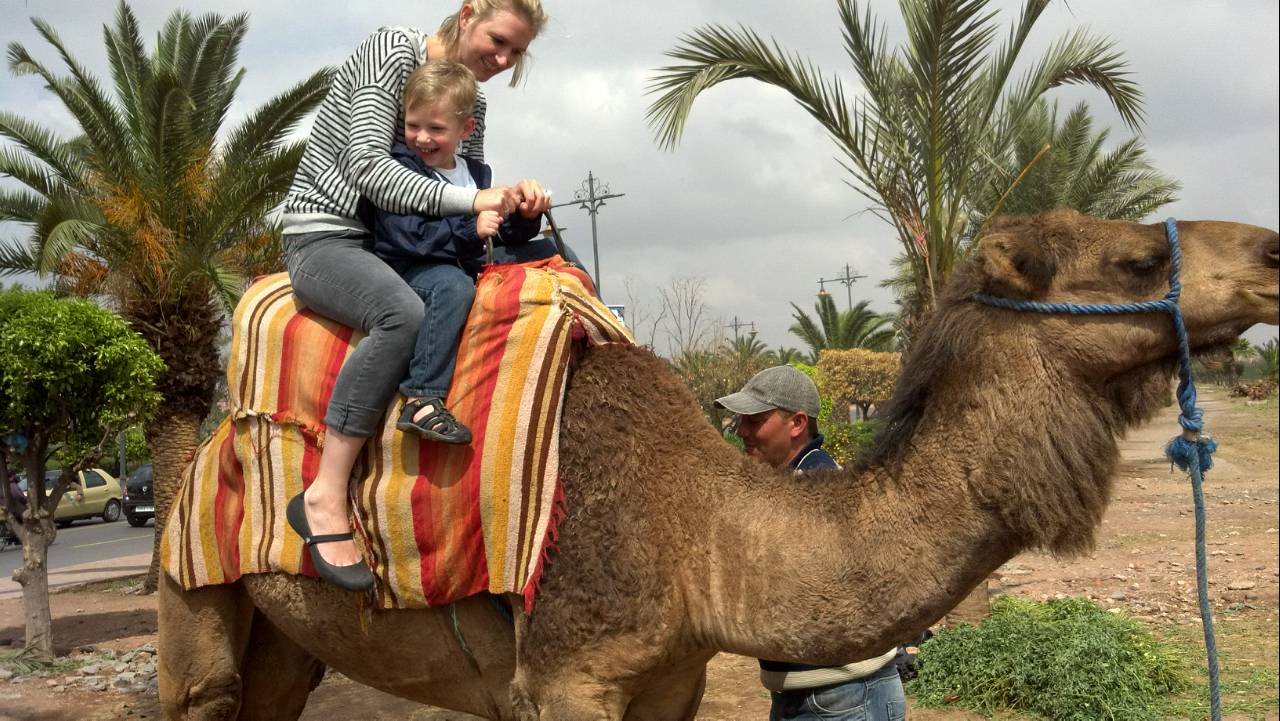 This afternoon, the four of us went out to the western outskirts of town to have a 30 minute ride on a couple of camels through a local park. HT kept a look like that on his face for most of the time. When we passed by some kids playing soccer who yelled “bonjour,” He screamed back, “I’m riding a CAMEL!” Karen tells me he spent most of the ride rocking back and forth in an exaggeration of the camel’s loping cadence. CR rode in the carrier on my belly this time and seemed to have a good time too, although mostly he was just trying to chew through the carrier. As a special bonus for HT, he got to sit on a tiny donkey they had saddled right before we left. Total animals ridden count=2.

Rather than take a taxi to the camels, however, we decided to go with the horse drawn carriage. We almost balked at the $30 price for an hour and a half of time (a taxi would have been 30-50% of that,) but HT was so excited about “riding horsies” that we went along with it: 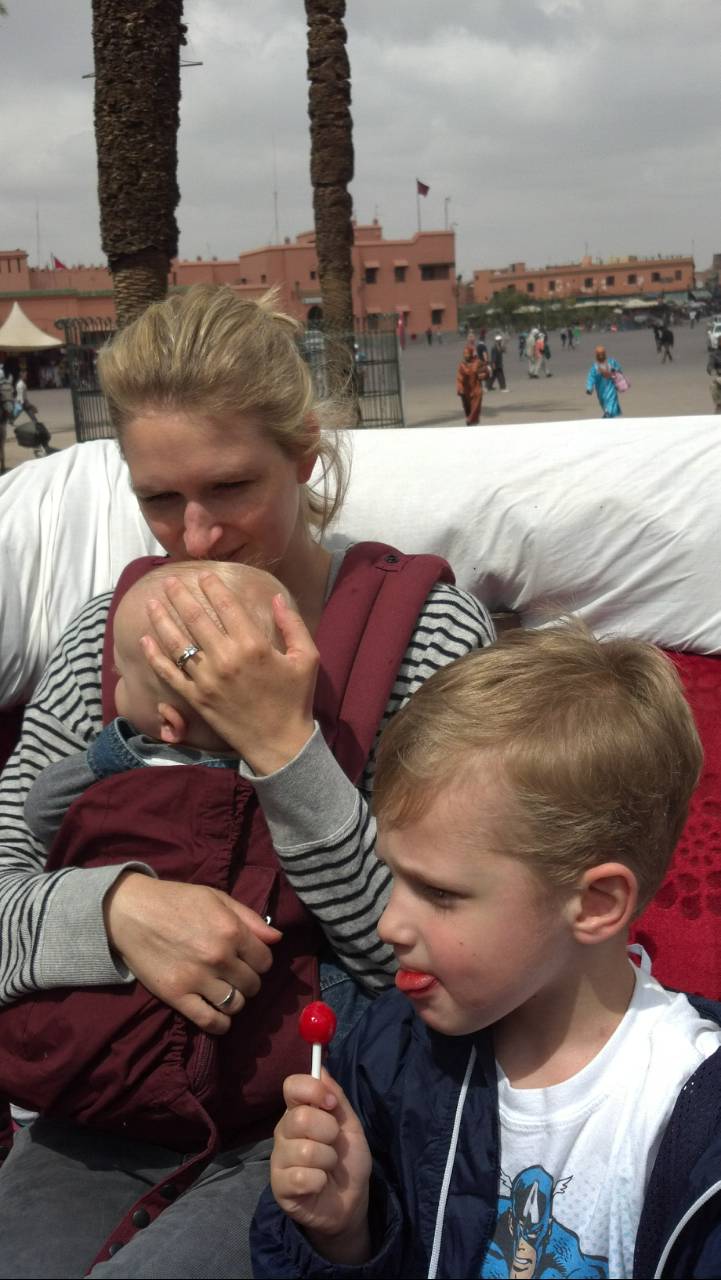 (Total animals ridden count=3) You can see from the picture that HT has a sucker. We’d actually planned to make the camel excursion in the morning, but that sucker gives a clue as to why we waited until the afternoon. For the past couple of days, we’ve been noticing a little bit of drainage out of his left ear and given his history of ear infections and the fact that Marrakesh, as a bigger more international city is likely to have better doctors (specifically, the pediatrician used by our French B&B owners,) we decided to get him checked out this morning.

We’re glad we did, since he actually did have an ear infection. It wasn’t the best of experiences, though, for either me or HT. (Karen stayed back with CR.) Because of the history of ear issues, he HATES going to the ear doctor and literally screamed for the entire 10 minutes we were with the nurse and doctor. This is normally pretty annoying, but was made worse by the fact that the doctor only spoke French and Spanish and I was trying my best to concentrate with my only slightly passable Espanol. Also slightly annoying is the fact we’re not supposed to wash his hair for the next 10 days–neither boy is receiving anything but sponge baths while we’re here since the consequences of them swallowing tap water are pretty nasty, but we were looking forward to really scrubbing them down as soon as we got back to Spain in 6 days.

We still figure the visit was pretty lucky, though. HT will get better, we only had to burn the morning, and the entire problem only ran us about $50 ($25 for the doctor, $25 for the medicine, and another $8 for the taxis there and back.) HT also put a happy spin on it once the doctor rewarded him with a sucker for his bravery. (If you look closely at the picture below, you can see pretty clearly from his face that I’m not lying about the screaming.) Here he is in front of the office after the whole ordeal: 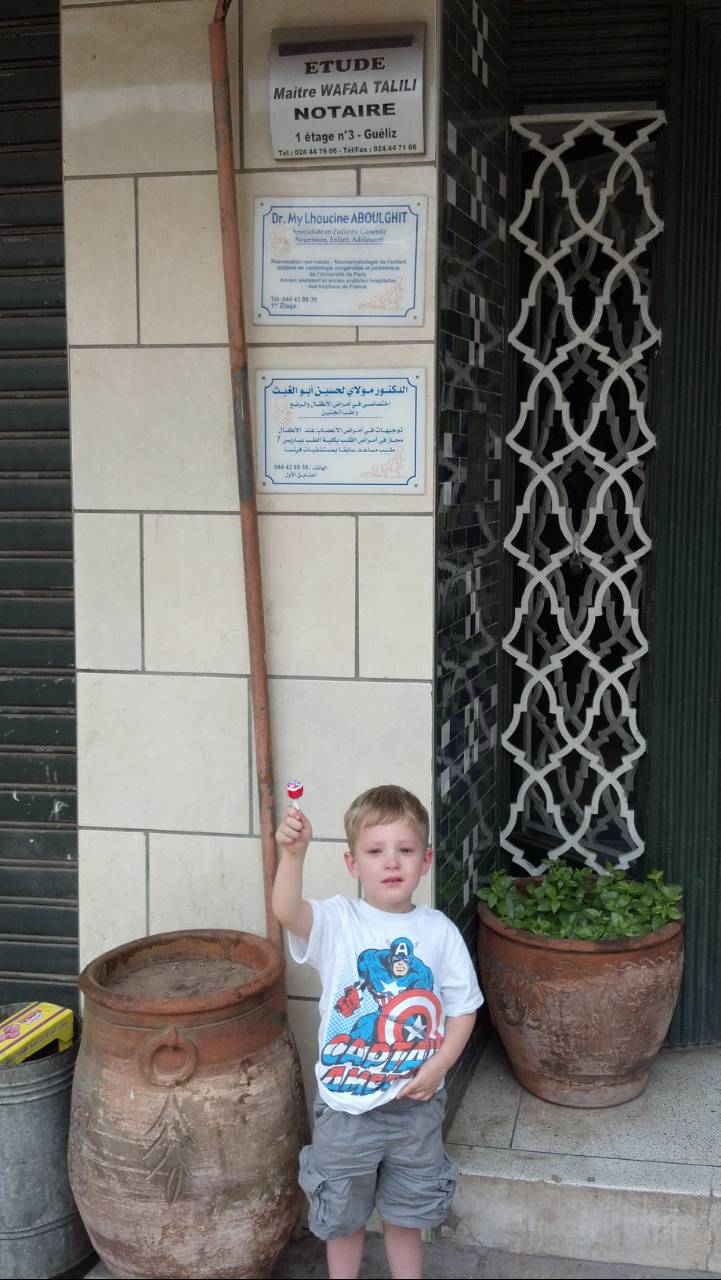 In addition to camel, donkey, and horse (carriage,) the rest of the afternoon was spent riding this animal (total animals ridden=4): 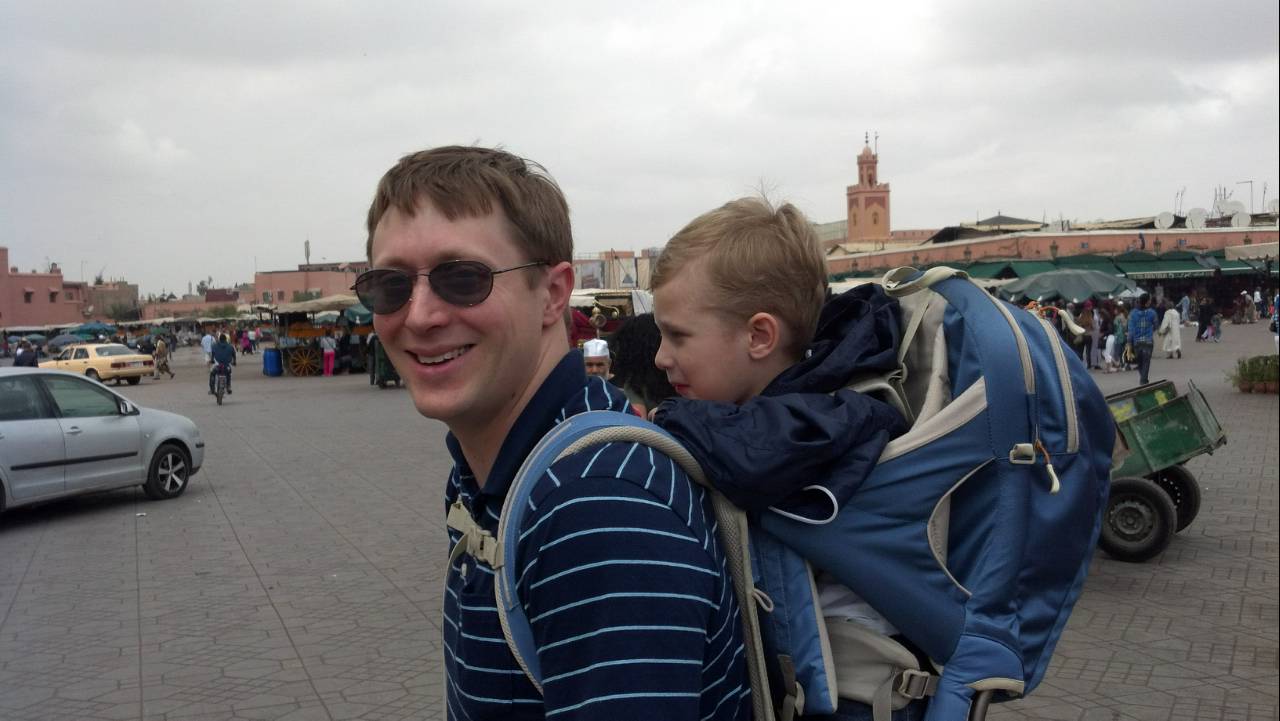 This picture is taken in front of the enormous Djemaa el Fna open market/square that everything we’ve visited here seems to center around (this is just a really small portion.)

We catch a train tomorrow morning for Fez, so decided to make our last dinner our third stop at our favorite restaurant of the entire trip. Karen and I love the lentils and the “tagine of chicken with tomato, honey, and almonds,” while HT loves the fact that they have two live peacocks and that he can eat his bread like this (as long as he takes his shoes off first:) 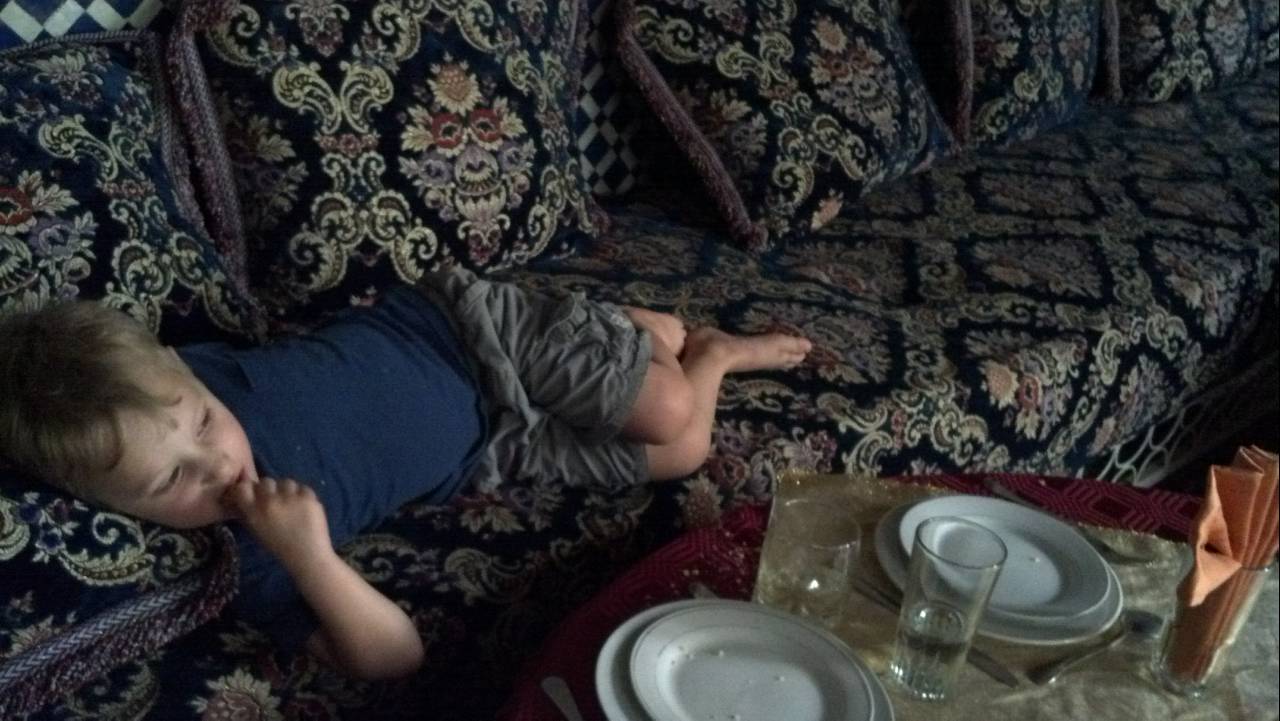