We landed in Marrakesh, Morocco a couple of days ago via a flight from Seville. (We’ve told HT that the reason he has to give up his froggy backpack at the security checkpoint is so they can check to make sure no aliens are inside. That’s something he can process pretty well, but makes for some interesting conversations with the screeners since one of his favorite books is about a bunch of aliens that love underpants.)

Morocco is a former French colony where French is an official language, so it’s a very popular destination for French tourists. As such, little blond babies are not completely unheard of here and we’ve found it pretty easy to settle in without too much hassle. For our four nights here, we’re staying near the center of the souk, or traditional market area, at a bed and breakfast run by a French couple (with two kids.)

The souk is pretty interesting and Karen and HT have found it to be a really new experience, although I’ve been telling them to wait for our next stop of Fez, which has the largest such area in the world. When I first visited Fez 13 years ago, it was my first trip to a developing country and I was blown away by the experience of having the world of Indiana Jones (think of the chase scene in Egypt where he loses Marion in the original movie) confront me in person. That trip is part of the reason I’ve traveled so broadly since, and I’m excited to finally get the chance to share the experience with my family.

Anyway, back to Marrakesh: the souk is a wild network of hard to map and hard to follow narrow roads, delineated by the buildings (mostly shops, but some restaurants, hotels, mosques, etc.) that make up the district. (There are no sidewalks.) For most roads, the width is too narrow to allow cars to pass, but there are countless people, bicycles, and motorbikes/scooters all over the place. HT is only allowed to walk for short distances while tightly holding my hand by the wall to make sure he’s safely out of the way–most of the time he just stays on my backpack carrier.

Most of the attraction of the town is just wandering around, seeing everything, shopping, and eating. (HT would probably add to that list the ever present access to $0.50 freshly squeezed glasses of orange juice–more in a bit.) that said, there are a few sites worth visiting for historic reasons and we’ve been squeezing those in between long lunches, naps, etc.

One such site is the ornate Bahia palace, which we visited yesterday. Karen and I were looking forward to seeing spectacular craftsmanship–fancy geometric tiling on the walls and floors, intricate paintings and wood carvings–and the kind of spaciousness you’d expect for the former king to be able to house his 4 wives and 24 concubines. (The current king just has the one wife.) HT ended up finding other things to get excited about.

“Daddy, I LOVE this palace. I want to stay here forEVER!”
“HT, we can’t do that. What would we eat?” 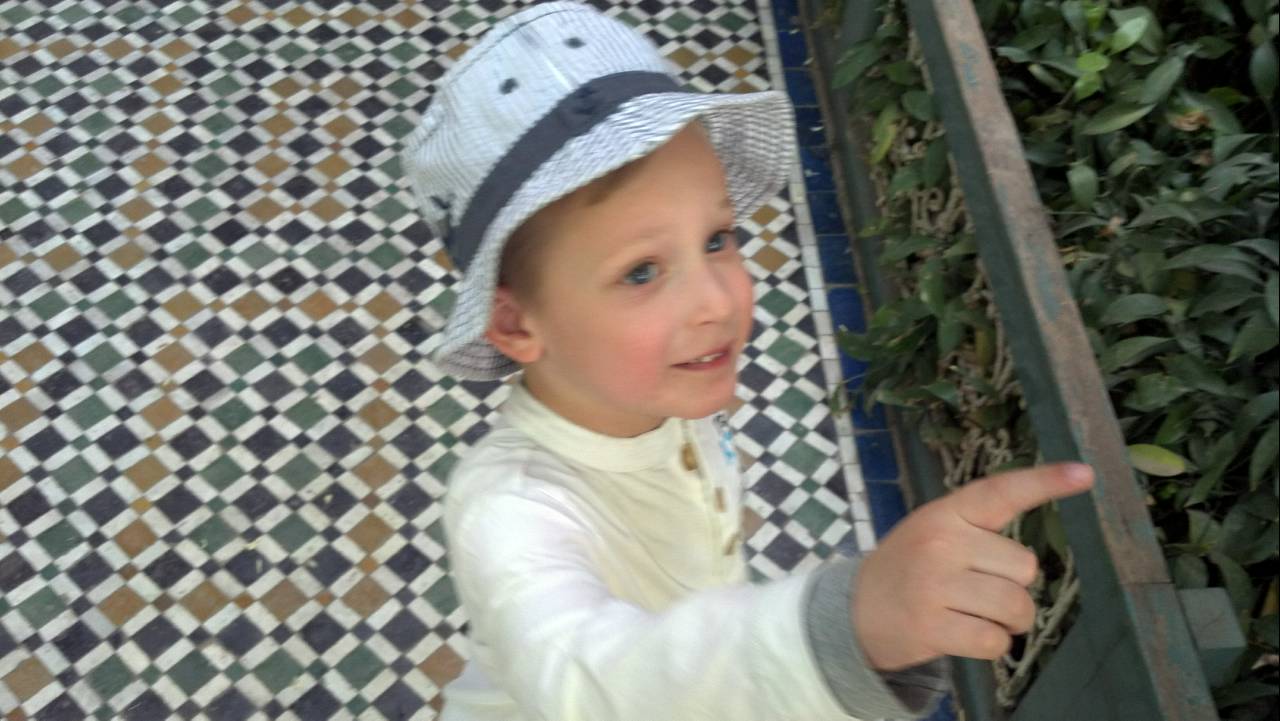 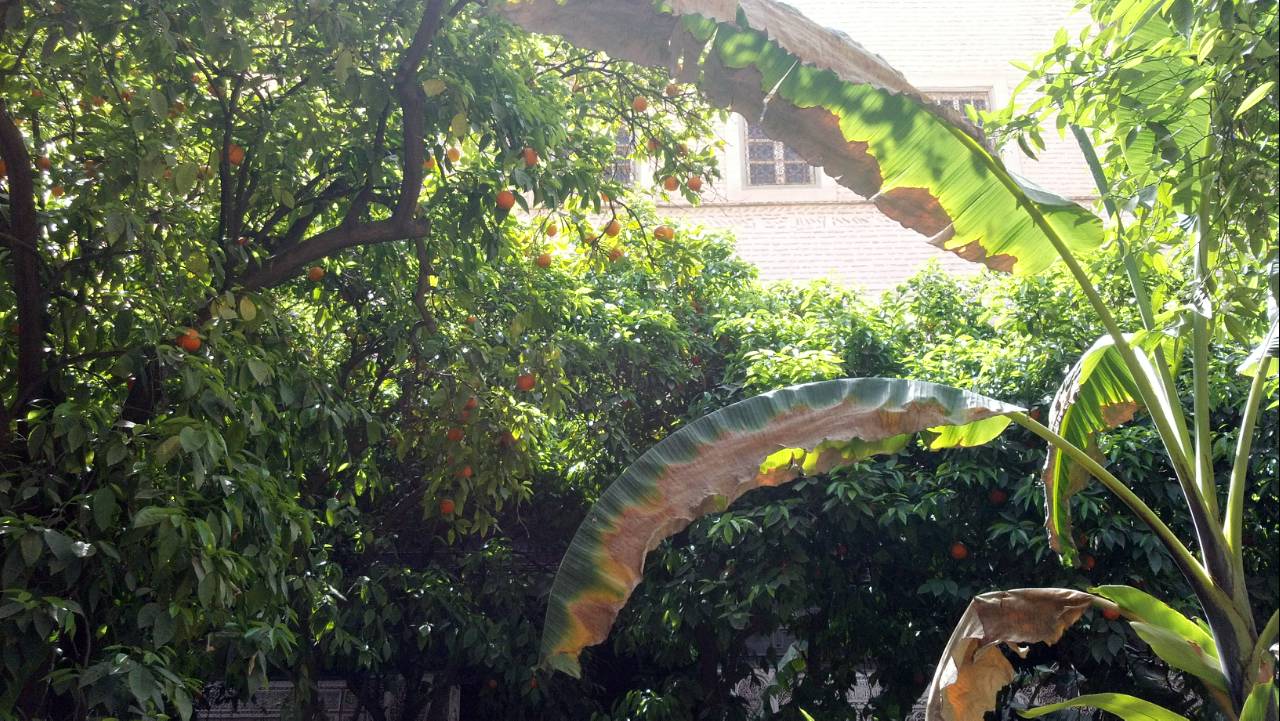 “I will climb up and GET them and put them in my hat and then we can SQUEEZE them and drink ORANGE JUICE!” (Demonstrates last bit by pretending to give juice out of his hat to his little brother. CR played along like he was in on the plan.)

Luckily, Karen and I have sole authority over where the family lives (although we do like when HT calls our B&B his “Morocco house,” as opposed to his “blue house in Chicago.”) Speaking of the hat, however, that was another thing that our almost four year old found a use for that wasn’t in our Lonely Planet guidebook as a highlight of the palace: 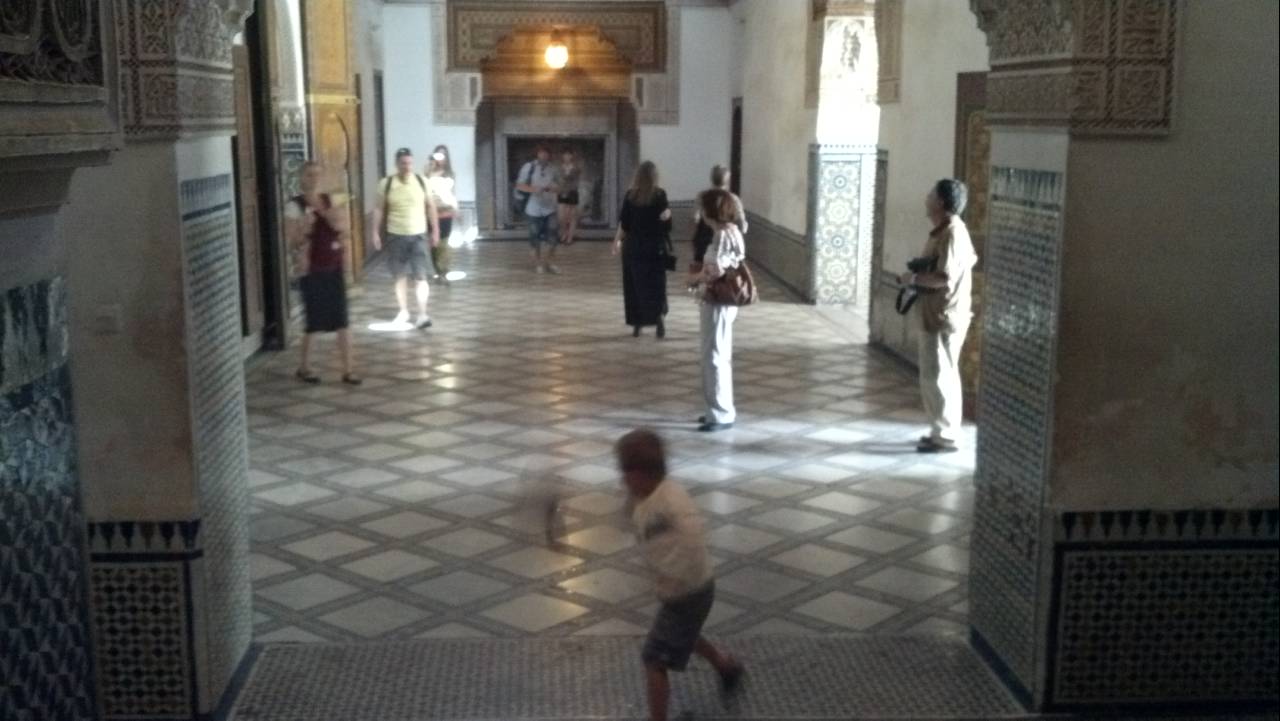 The blur you see in the picture is him throwing it all over the place–mostly up in the air, but sometimes sideways. I said that Moroccans are used to tourist kids, but the other tourists at the palace mostly found him hilarious. The only way to get him to stop was to make up a game where he was Donkey looking for Shrek in the other parts of the palace–also not something I read about in our guidebook.

So, that palace and the other sights over the last few days have been a lot of fun, often because of the sheer randomness of HT’s imagination. The cool thing is, Karen and I still got what we were expecting out of the whole thing too–take a gander at how pretty this place is: 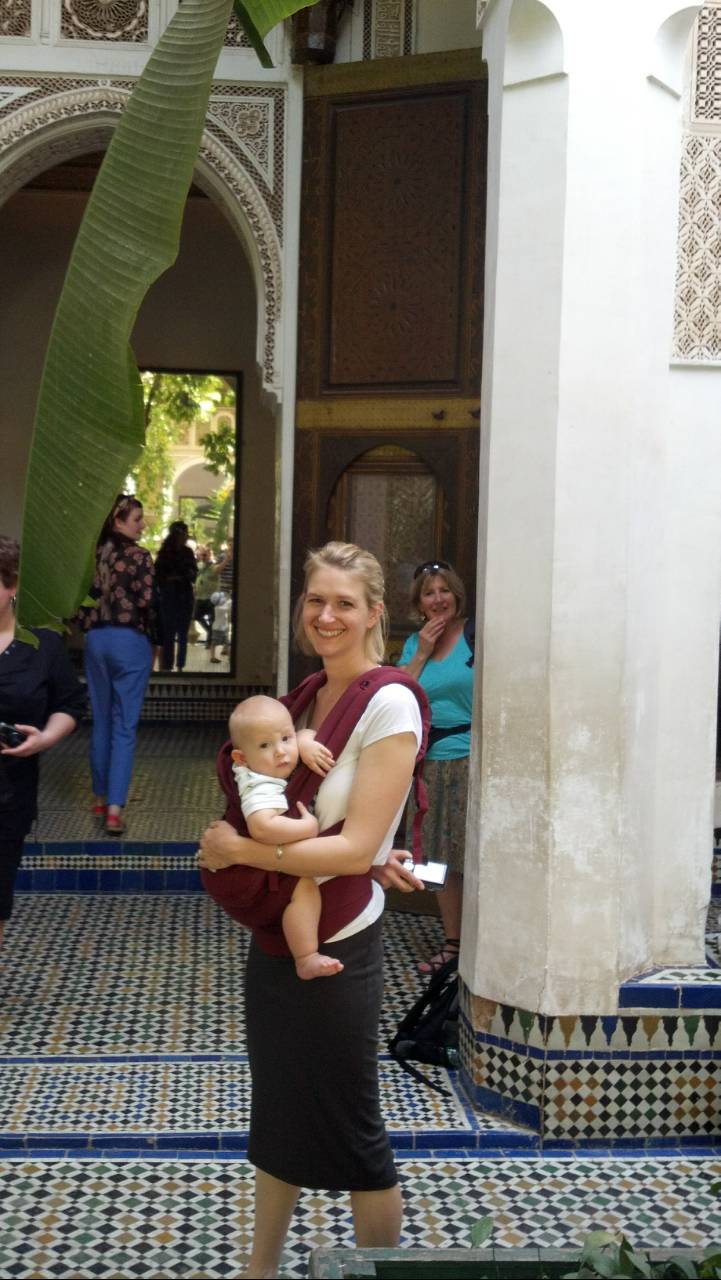 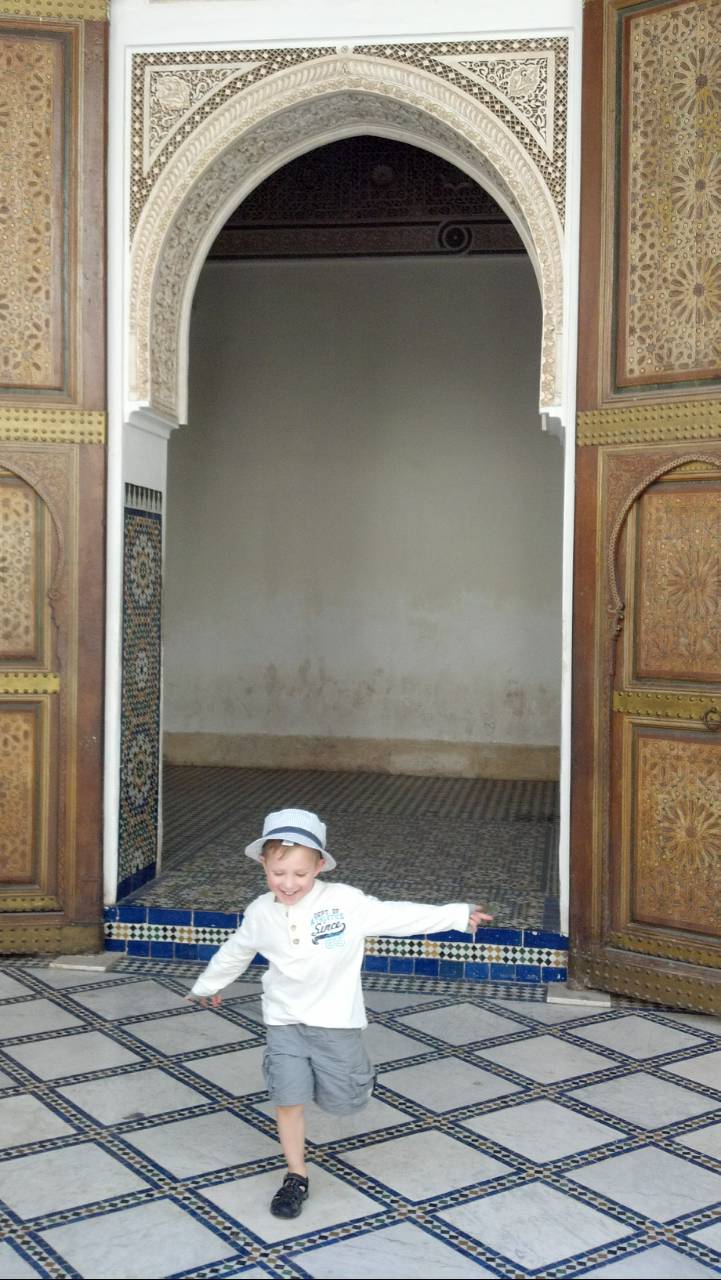 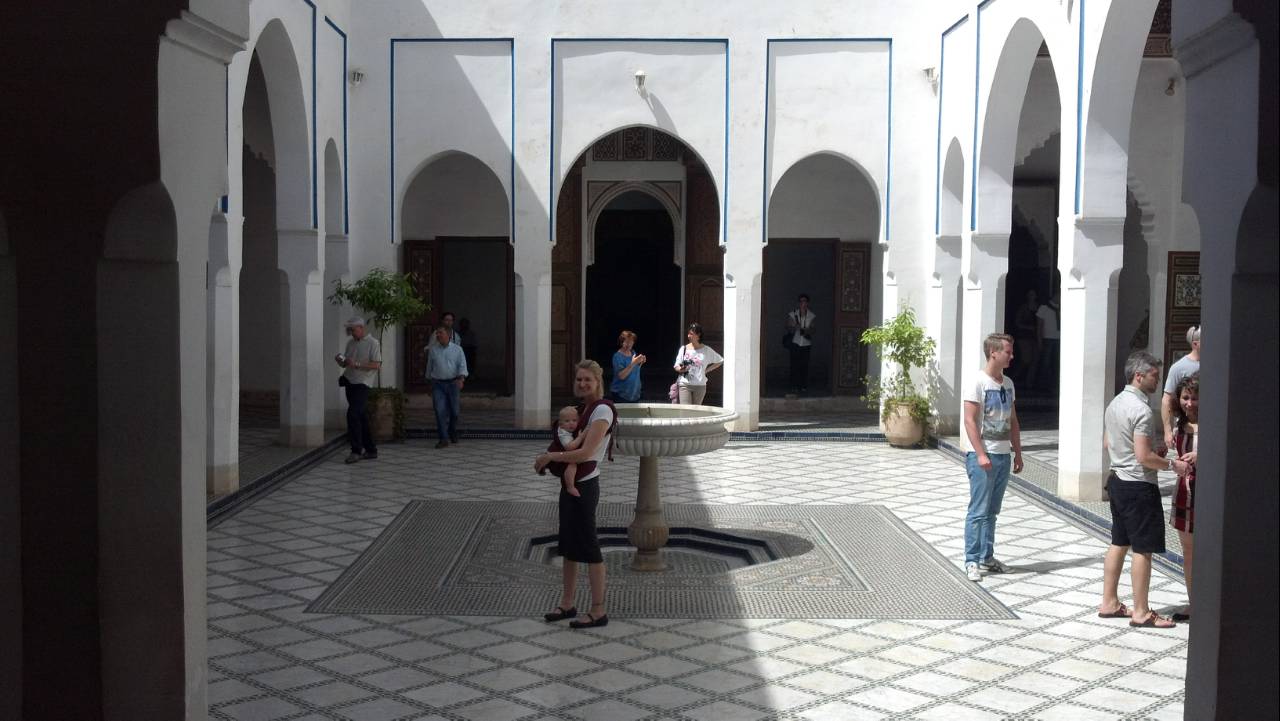 Highlights today included the short walk to the post office to send HT’s homework (he’s supposed to send his preschool a postcard from every country we visit) and rocking out to the nighttime street performers in the middle of the famous and massive central square (where someone has been doing a version of what we heard for centuries, more or less every night.) We’re in search of camel rides tomorrow–hopefully we’ll at least have something for our Christmas cards this year (which we never got around to even making this past year.) i’ll hopefully have something to share here soon!