I'm happy to report that after a major lack of sleep, all of us got at least 9 hours last night and woke up at roughly the right time.

That, however, didn't prevent us from having a great first day in Seoul yesterday. Here's what we did.

First of all, here's the neighborhood where we're staying: 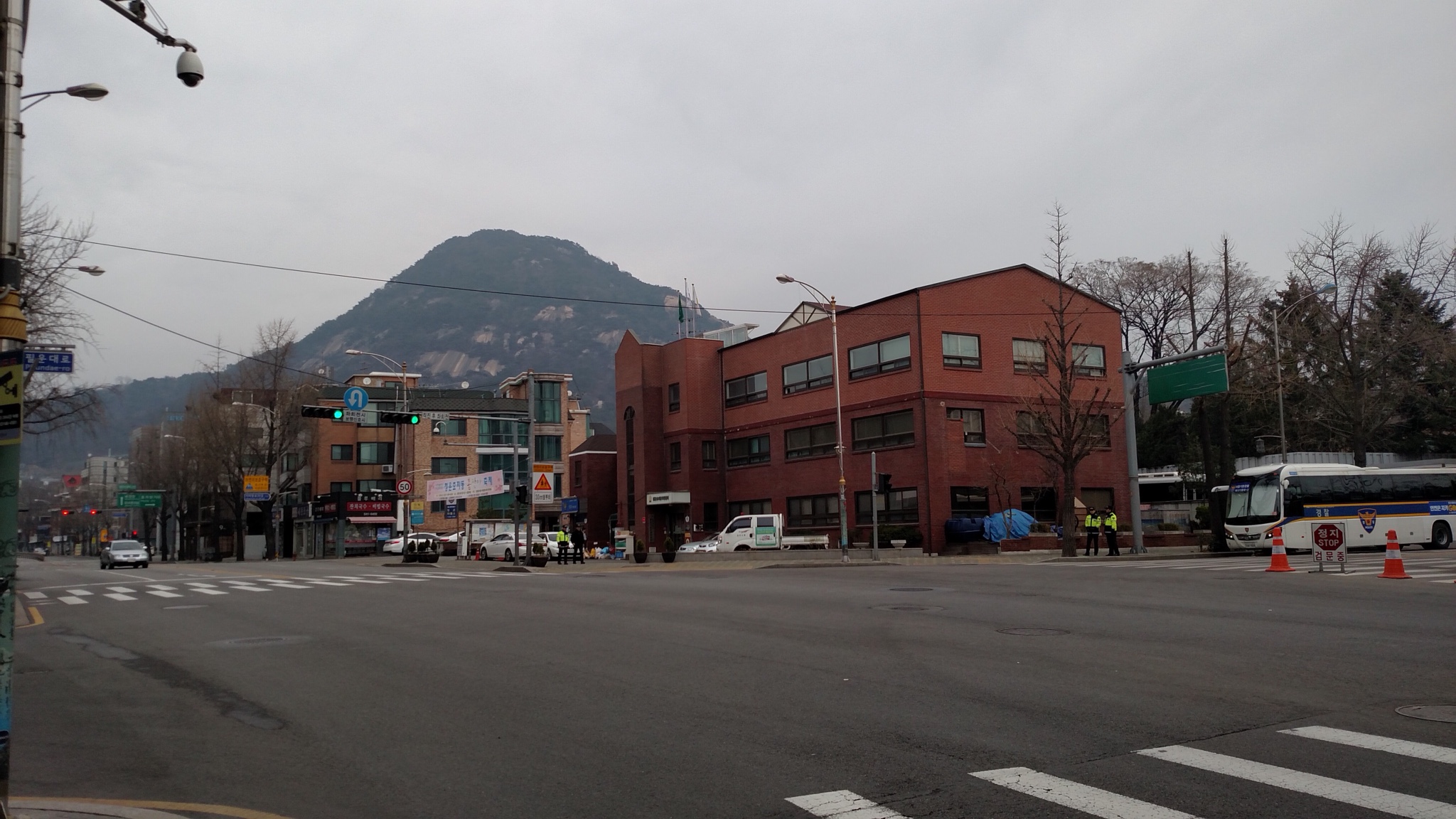 The big mountain provides a beautiful backdrop. So nice, in fact, that the folks here decided to put their Presidential Palace in front of it. I didn't know that when I was out grabbing breakfast–although, I knew something was up when I saw all the police standing around with a huge number of tour busses parking in the vicinity (more on the police later.)

In case you're wondering, here's how we roll: 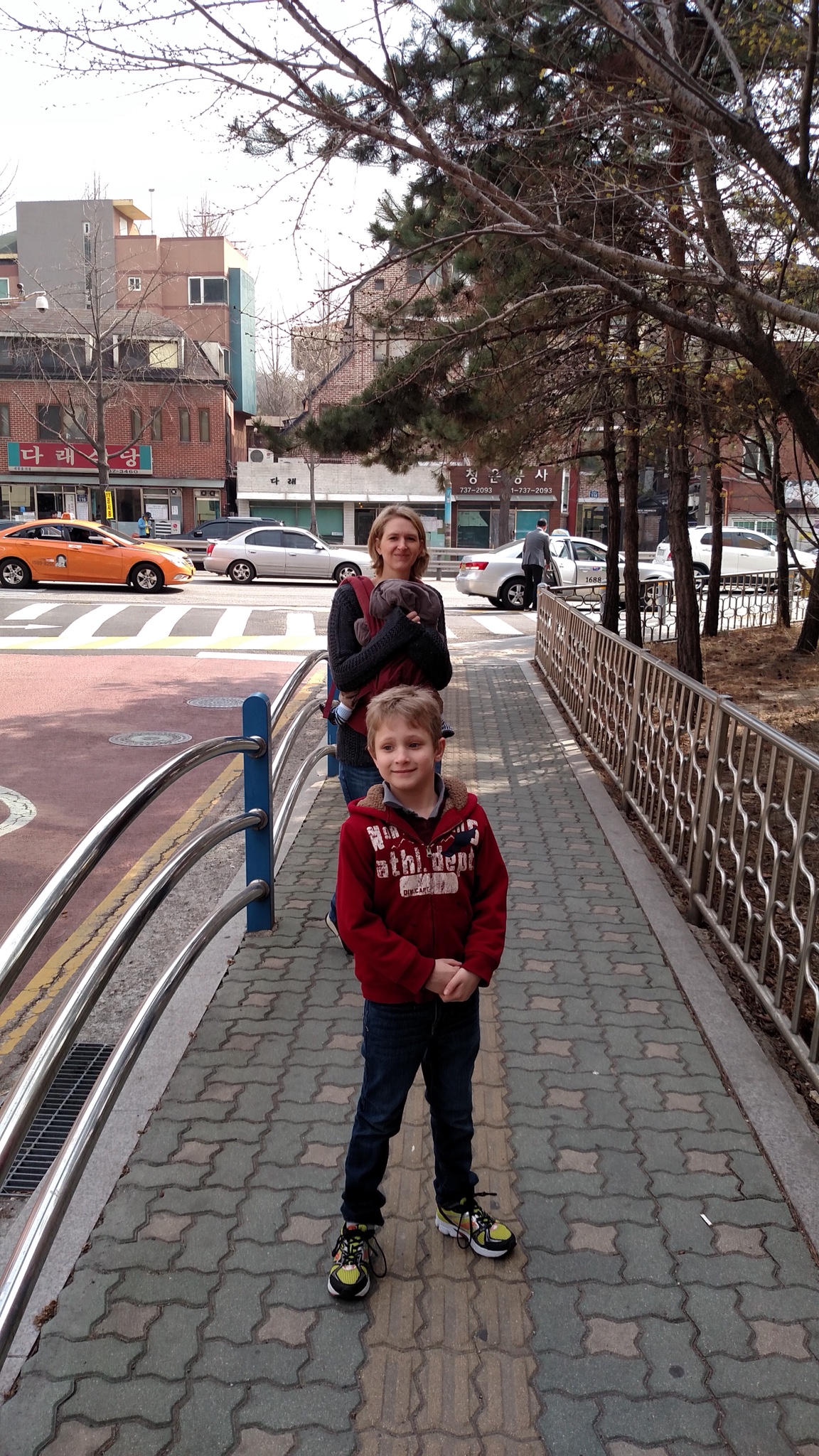 HT has to walk, but JR gets a nice ride inside his favorite place 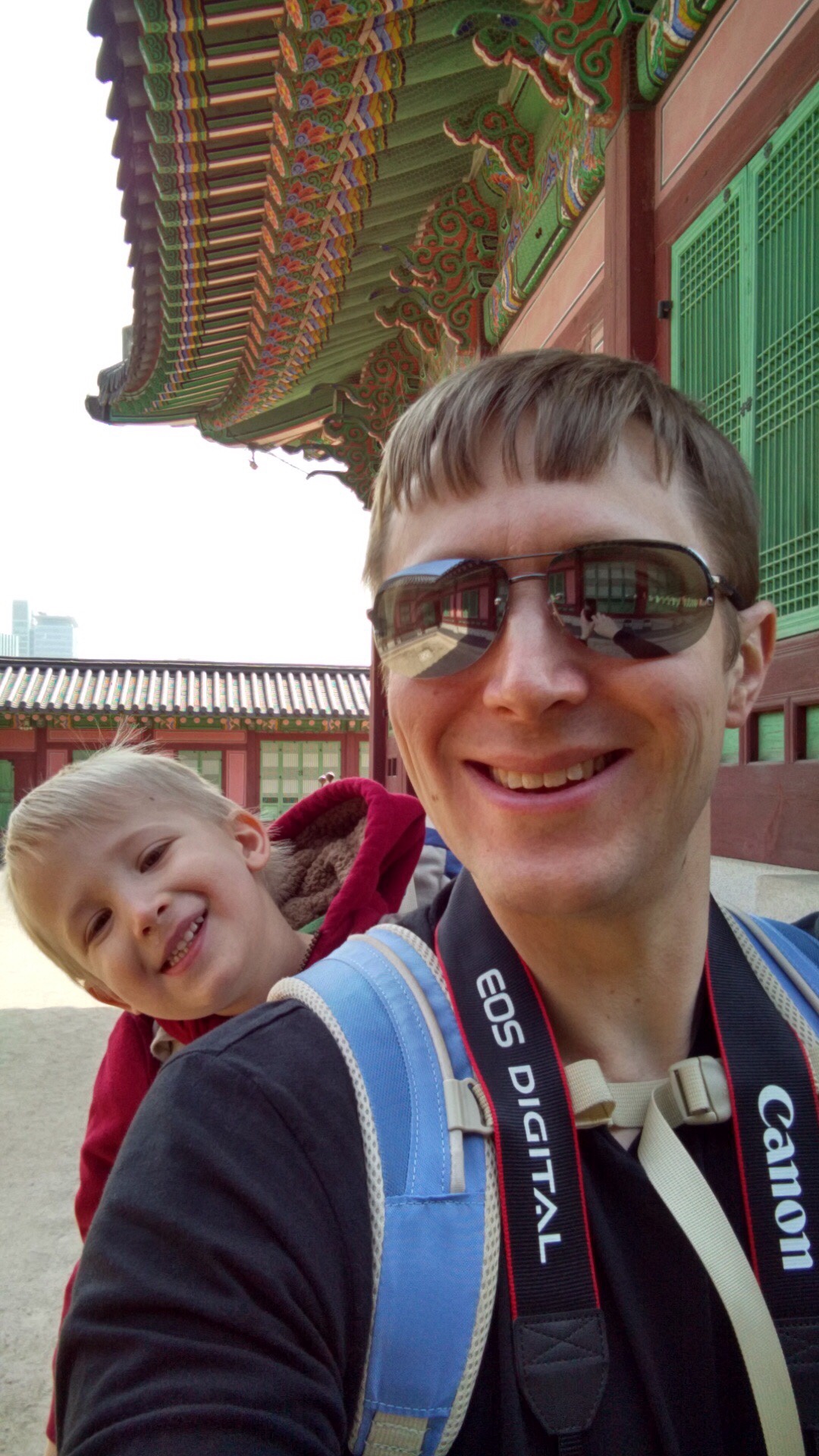 CR also gets a ride, although we make him walk every now and then

As you can see from the backdrop of the picture of me and CR, our big stop today was to see the national palace, Gyeongbokgung. This is one of two palaces we're planning on seeing here. If you're familiar with the Forbidden City in Beijing, the layout is pretty similar–there is a lot of shared cultural history here with China, given its what the Korean Peninsula is attached to.

Here's another view of the palace area with some blonde kid: 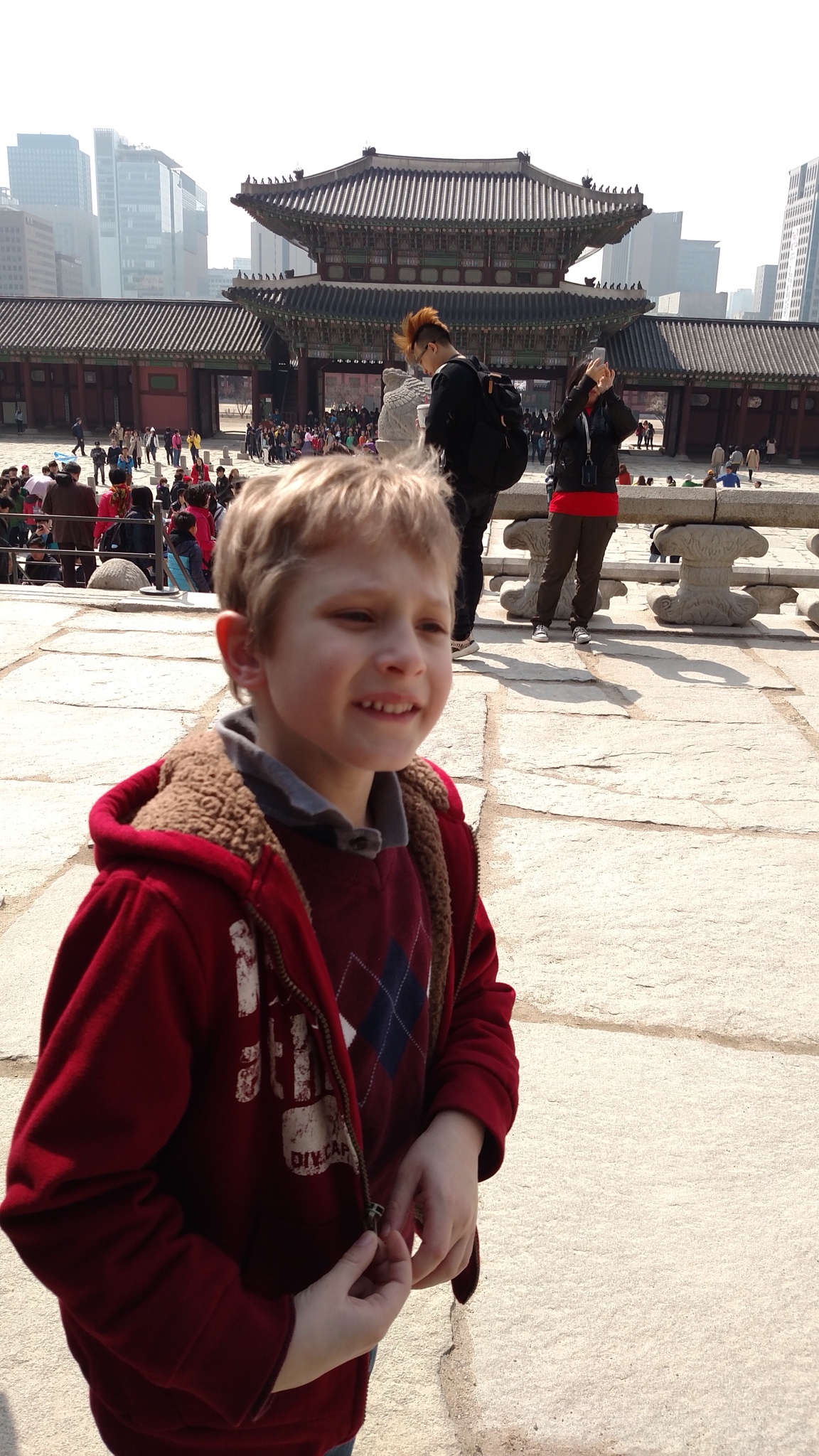 I should mention that, as expected, the three blonde kids were actually something of an attraction in and of themselves. Our family is already the subject of countless pictures from the above mentioned tour buses (mostly from other parts of Korea and China.) HT was even pulled aside by a young Chinese woman so she could take a selfie-stick picture with the two of them. (He was embarrassed.)

In addition to ancient history, HT and CR got a chance to play with some local kids at the Children's Museum on the palace grounds. (They loved it, we might be going back.) 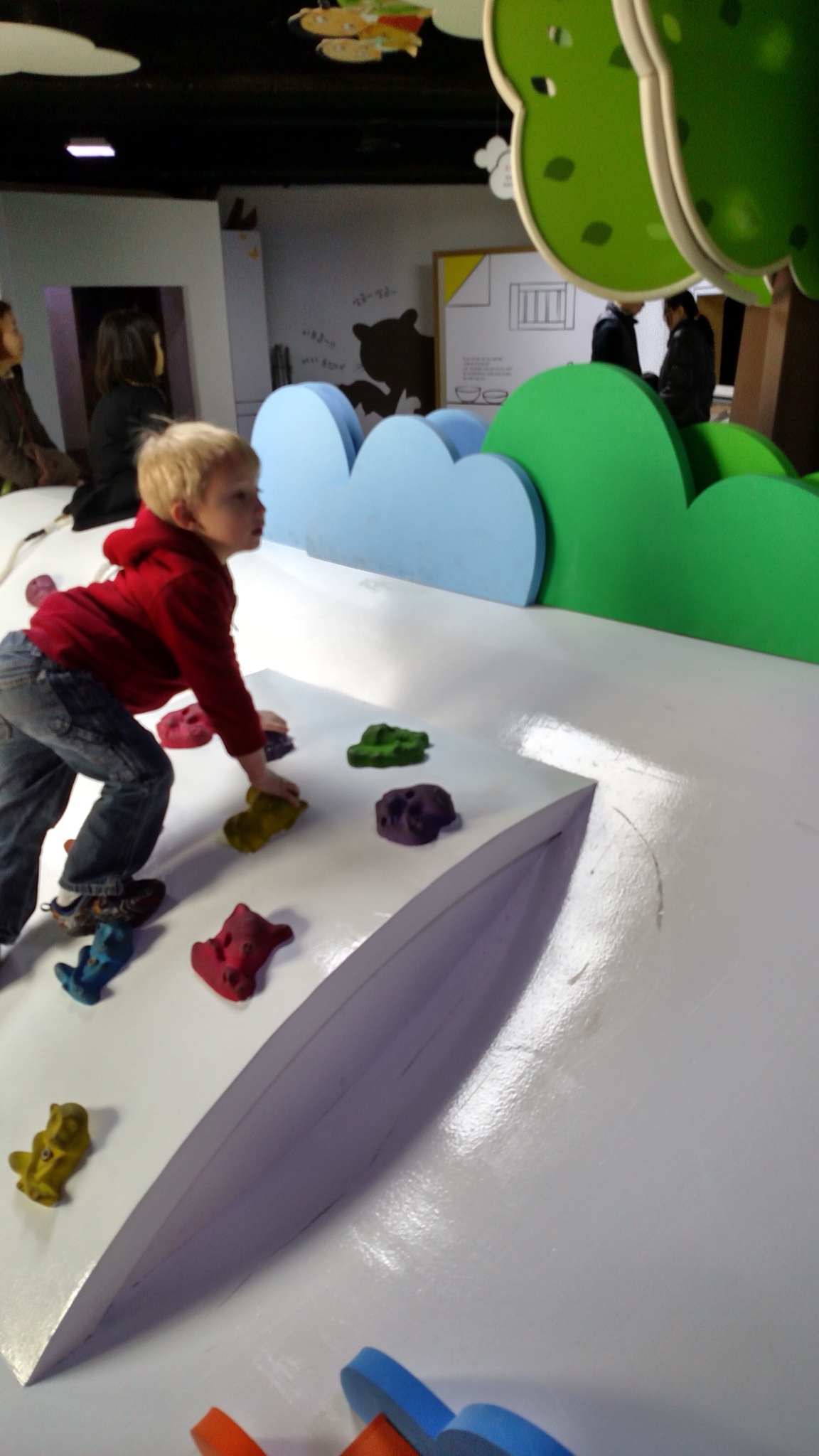 Finally, after a long day of walking, we ventured out for our kids' first authentic Korean meal. Because we were tired, we didn't bother with being picky–we just walked into the closest little restaurant to our place. It was a small place with maybe 10 tables, 8 of which were already occupied by some of those policemen we'd been seeing all day. They all seemed amused with us and recommended the food we got–since there was no English anywhere on the menu, all we knew about what we were getting was the price.

It turned out to be Bossom, a sliced steamed pork served with kimchi (you wrap them together and eat as one bite.) The boys thought the kimchi was a little too spicy and Karen's trying to limit her spice intake so that JR doesn't get too much in his breast milk, but there were enough yummy sides that everyone left full: 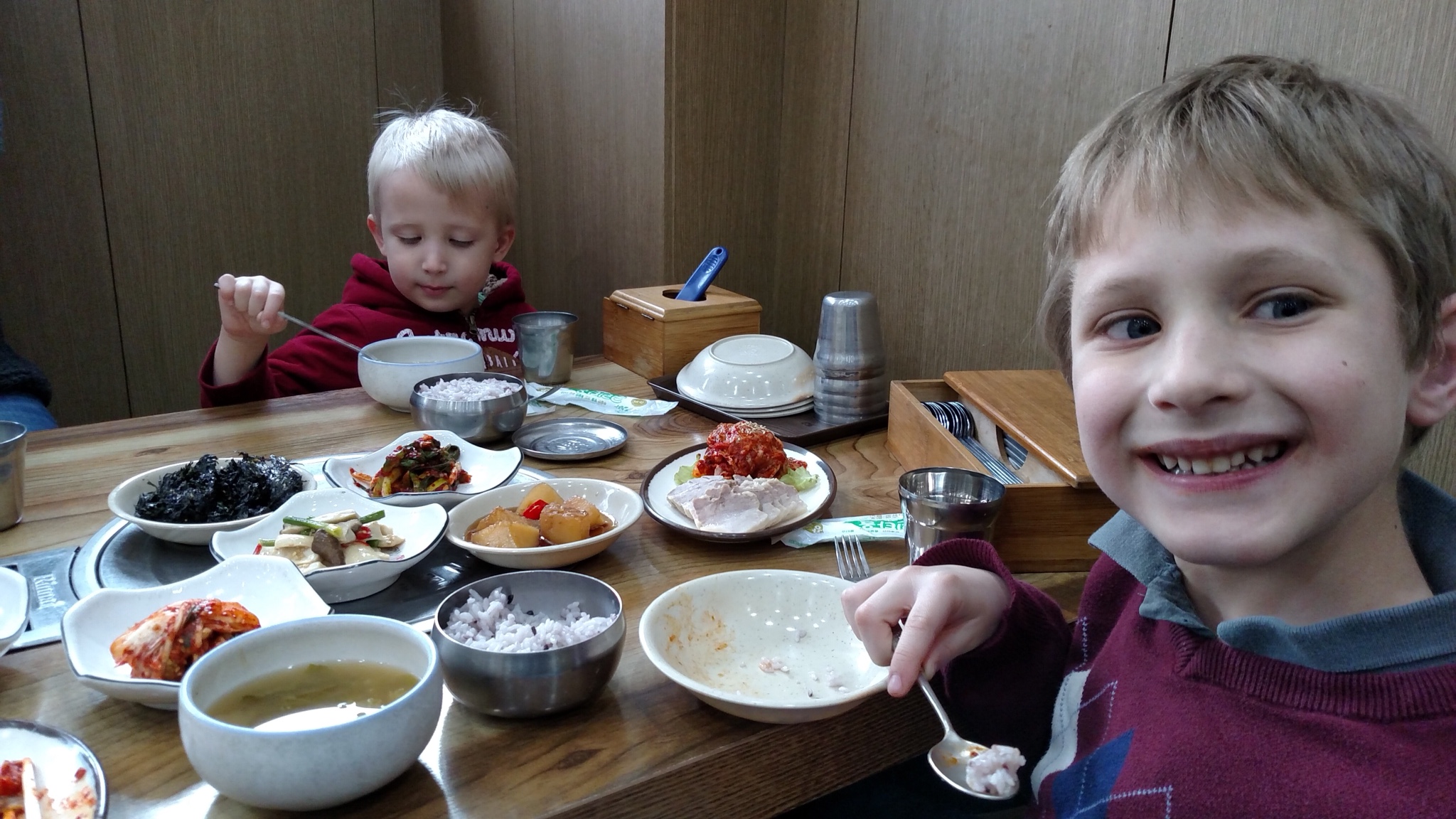 Thankful it came with a big thing of rice

So that was the day! I might not post every day, but that was enough fun to be worth capturing.

P.S. To Karen's friends, she can't access her email here because Yahoo is helpfully asking her to verify her identity with a text message to her phone back home. If you want to tell her anything, just drop me a line and I'll share.

My wife is awesome! Also, people make money on travelers