When you and your spouse hear this several times a day, there’s maybe something to it. This isn’t a phrase we normally hear (at least not her,) so I’m guessing it must have something to do with the trip we’re taking.

Tomorrow, we leave for London. We’ve been there a few times already. In fact, Karen used to live there during the two summers between her sophomore and senior years of college; so that’s not particularly crazy. After just a day in London, we go to Portugal for 4 days. I’ve been to Lisbon a couple of times in March (once with Karen) and it rained pretty much the whole time. That’s unfortunate and maybe a sign we’re not learning very well from experience, but not crazy.

After Lisbon, we’re heading to Seville, where we’re immediately hopping on a flight to Marrakesh, Morocco. That’s a little more out there, but we’ve been wanting to make it back ever since our plans to go to my friend Lisa’s wedding there got interrupted by the volcanic eruptions two years ago. Heck, though, just visiting isn’t as wild as planning a destination wedding there.

From there, it’s on to Fes (which felt like a fever dream when I went there 13 years ago, with narrow labyrinths of surprising sights, including a bunch of animal heads on sale for meat,) Tangier (featured in the Bourne Ultimatum,) and then a ferry across to Spain. In Spain, we’re going to rent an apartment for a week in Seville and soak in the  famous “Semana Santa” festival (a.k.a Holy Week.) Hopefully very fun, but not crazy.

No, I think people are probably referring to the fact that Karen and I are planning on bringing these guys: 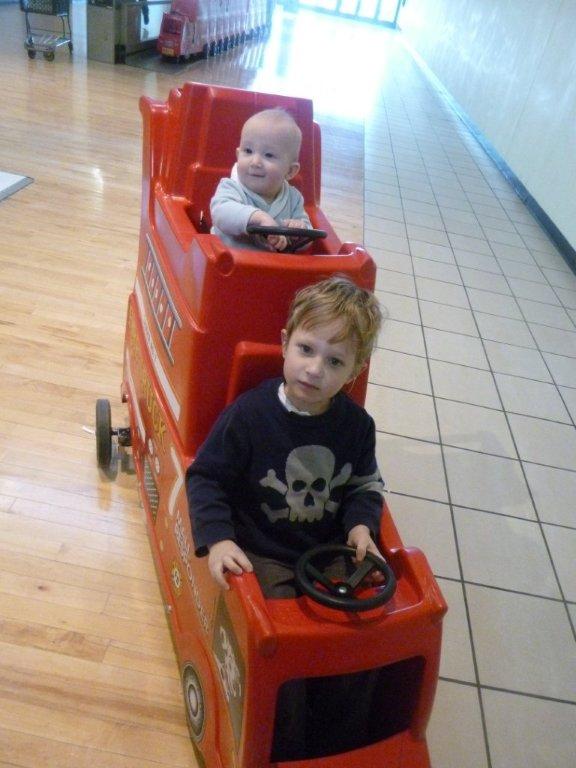 HT will be four in April and is a seasoned traveler at this point (this will be his fifth continent,) but this will be the first time CR, who’s 9 months old, ever leaves the country. We didn’t think it was crazy to take the two of them on our almost four week trip, but many of our friends seem to disagree. Stay tuned to this blog to find out who’s right! (Yes, I know, it’s been over 2 years since I’ve written anything here, but I’m going to try really hard this time.)

P.S. We don’t actually call them by their initials–we’re not that preppy. My brother, a computer scientist who worries about privacy in a much more sophisticated way than me, has convinced me it’s better not to put their full names out there. Alternatively, we sometimes call them C Monkey and H Bomb, but I’ll probably just stick to initials.

No jet lag in London!

Interesting article about traveling and creativity