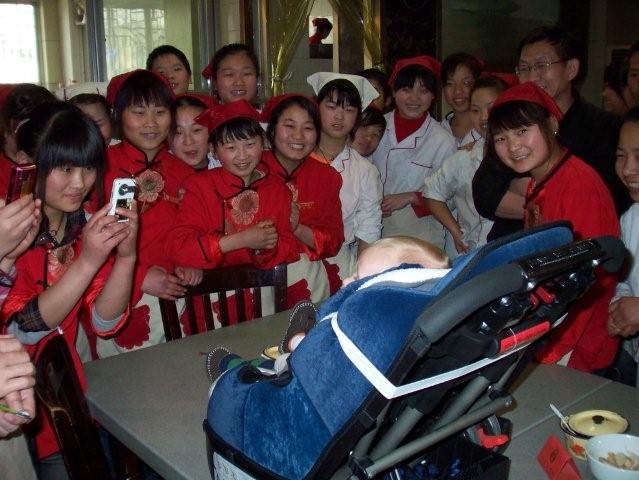 I’m used to getting stares when I travel.  There was once the guy in India that came up to me while I was lying at the beach and sat down 2 feet in front of me (facing away from the ocean) for about an hour just to stare.  Then there were the Indian schoolkids that would spend the better part of their visit to a national monument just following me around asking to have their picture taken.

Nothing I’ve experienced, though, has prepared me for Henry’s reception here in China.  As our tour guide in Beijing said, “he’s a superstar!”  Everywhere we go, he is the most exciting thing going to just about everybody there.  This includes a couple days ago when he was sitting at the entrance to the Terra Cota warriors in Xi’an and everybody stopped to look at him instead of the 2,300 year old statues.  It includes all of the temples and historic palaces.  It even includes the historic Forbidden City.  (Funny story there–when my friend Todd and I went there 5 years ago, there was a Starbucks in the middle of the Forbidden City, which we thought was a good symbol of the emerging consumerism in China.  Since then in preparation for the Olympics, they cleaned it up by replacing it with a new coffee/tea place with a sign saying “China time honoured brand” where the Starbucks used to be.  I’m sure no irony was intended in the change, but somewhere the propaganda apparatus of the communist party is really humming.)

Thankfully, Henry turns out to be an incredibly outgoing and easygoing baby.  He loves to ham it up for the crowds and smiles for everyone.  Except for the couple of days it took him to adjust to local time, traveling with him has been a delight.  (Karen says, “we’re never traveling in Asia without a baby again.”  It really has been a ton of fun.)

People have generally been pretty respectful about not trying to grab his face and hands (one thing we were a little concerned about given the hepatitus, etc, that’s prevalent here), but occasionally people do really want to hold him.  Most of the time we just let them so they can have their picture taken of them (my dad has a whole collection of pictures of people taking pictures of him.)  One time someone definitely went too far, though, was when Karen and my mom were trying to change him in the bathroom (he was being held up with his diaper off) and a lady was so excited she kept trying to ask to hold him, swinging in the wind and all.  Sometimes the “golden hair” boy (a comment we hear all over) is just too big a draw.