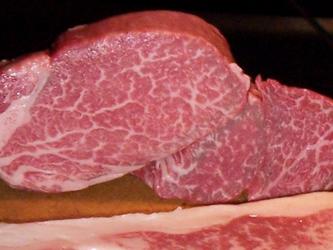 The city of Kobe is reputed to have the best beef in the world, so last night Karen and I made a special trip there just to try some.  (I don’t just eat McDonalds!) There’re a number of reasons why this stuff is supposed to be so good, the foremost of which is that the Wagyu breed of cattle raised here has been specially selected for tastiness.  In addition to that, though, there are a bunch of traditional techniques they use in raising them.  Many of them are local trade secrets, but two we’ve heard of include giving the cows regular massages to soften up the muscle and feeding them lots wine and beer hops to keep them fat and happy. The meat itself is pretty fatty, but the fat is marbled into the meat throughout in very fine lines.  The result is that rather than feeling like you’re chewing on a bunch of fat, ours, cooked medium well, tasted more like a leaner cut, but with a softer, chewier consistency. Someday scientists might genetically engineer something better, but until that day I’m going to have to agree that this is the best beef I’ve ever tasted (as well as the priciest.)

Bringing vending to a higher level